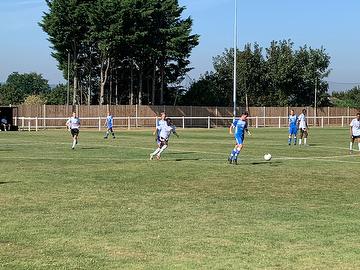 Academy come from behind to win against The Wings

The Academy, ahead in just 18 seconds, needed two late goals from Ben Twist to snatch all three points from their opening National Under-19 Alliance match in a well contested game with Welling United at the Taray Community Stadium, home to Larkfield & New Hythe Football Club.

The season could hardly have gotten off to a better start when a pinpoint cross from the left found the head of Cameron Wootton who finished with ease.

Welling quickly found their feet after a nightmare start and successive free kicks around the edge of box brought corners which were dealt with without much alarm.

On 13 minutes Billy Kent brought a good save out of the Welling goalkeeper with the resultant corner headed wide by Joe Tyrie.

On the half-hour a sparkling run from Ben Hermitage ended with his shot striking the left hand post but there were most definitely two sides in the game and Welling were unlucky when an offside decision went against them as an equaliser was chalked off.

Two late chances for Wootton and Hermitage failed to add to the single goal, half-time scoreline.

The Welling goalkeeper, who had looked nervous on occasions in the first half, brought off a superb double save to deny Wootton and then Shea Brennan from the rebound in the opening minute of the second period.

But within a minute the visitors were level when a route one pass brought a hesitation from the Angels’ keeper and a defender allowing to Welling centre forward to execute a fine lob.

Welling entered into a period of play in which they dominated the game without unduly threatening Lewis Wilkins’ goal but with 15 minutes remaining, the right winger wriggled his way clear to pull the ball back from the bye-line offering a tap in for the centre forward.

When he was needed most, the outstanding Twist came to the fore and following a header on from Will Russell drew the goalkeeper and calmly slotted the ball into the far corner after 81 minutes and then with just four minutes remaining he was sent clear again, this time by  Finn Hartley to repeat the act.

Whilst glad of the opening day win, manager Tom Parkinson was disappointed with the performance. “Apart from two or three, we were nowhere near the level of performance that this team is capable of.”