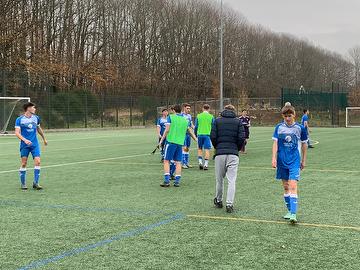 Academy through to last 16 of National Alliance League Cup

Four goals in the last eight minutes, given the number of efforts on goal during the game, gave a fair reflection as Tonbridge Angels Academy cruised into the National Academies League Cup last 16, winning by 7-0.

Sutton United put up a stubborn resistance during a first half that was mainly one-way traffic but only produced a single goal for the Angels.

Tonbridge started the game on the front foot, had a goal disallowed for offside after five minutes, and saw efforts from Ben Hermitage, Ben Twist, Billy Kent and Cameron Wootton saved by the busy Sutton goalkeeper before they finally broke the deadlock after 24 minutes when a corner was headed on at the near post for skipper Joe Tyrie to convert at the far post.

A mixture of wasteful finishing and stout defending kept the Angels at bay, including a trio of attempts on goal after 38 minutes that were either denied by the goalkeeper or the woodwork.

Whilst a single goal lead is always vulnerable, with Sutton virtually pinned in their own half for long periods there was little threat on Nathan Carter’s goal.

Twenty second half minutes passed with a disallowed goal from Hermitage after the ball had struck the overhead wire and several chances going begging before Finn Hartley, on as a substitute, finished in the bottom corner after being sent clear by Kian Austin.

Kent struck a post prior to Hartley adding his second and the Angels third, taking a fine pass from fellow substitute Mason Nicholls before burying his shot into the same square footage of netting as his first.

This was the goal that broke the resolve of Sutton and the Academy ran riot in the closing minutes as heads dropped in opposition.

Billy Kent was rewarded for sheer persistence when his 20 yard shot whistled past the goalkeeper to make it 4-0 after 78 minutes and four minutes later he found the net again after being set up by Nicholls.

Kent reciprocated the assist to allow Nicholls to add goal number six from around the penalty spot and Ben Twist rounded off a fine performance from midfield with a shot from outside of the box.

There was still time for Kent to see his shot turned onto the crossbar by the keeper before the final whistle following which Tommy Parkinson reflected: “A dominant performance from start to finish with several players missing. Pleased to get another clean sheet and score seven goals to get through to the next round.”