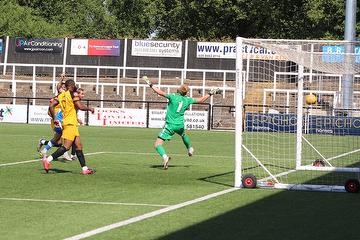 Angels made the comparatively short journey to the palatial surroundings of Hayes Lane, Bromley, to play Cray Wanderers of Isthmian Premier for their third pre-season friendly.

The first half saw Angels largely in the ascendancy and arguably should have been further ahead than just the one goal scored by Lewis Gard in the 39th minutes.

As early as the 1st minute Louis Collins was in with a chance.  There followed an effort just wide from Mason Saunders-Henry and on 9 minutes a teasing cross from Craig Braham-Barrett just eluded two Angels players.

There was little threat from the Wands until the16th minute when Anthony Cooke from just outside the penalty area came up with a dipping shot that just cleared Jonny Henly’s crossbar.

Joe Turner and Jamie Fielding for the Angels were starting to produce a series  of crosses that were testing the hosts defence and in truth on two occasions Louis Collins was presented with good chances to open the scoring from those crosses.

But crosses were not the only way that Angels continued to put pressure on Cray.  That man Turner produced a fine save from Wands no 1 on 23 minutes while a minute later he was just wide with another effort from the edge of the area.

Perhaps Turner’s best chance came on 33 minutes when after fine work on the right wing by Jamie Fielding he put in a hanging cross but the winger just couldn’t get the right connection.

The almost inevitable Angels goal came in the 39th minute when Fielding again produced a terrific cross and this time it was Lewis Gard who did the necessary to put the Angels one up.

The second half was a different story. Somehow Angels just couldn’t reproduce the flowing football witnessed in the first period. This is pre-season and quite rightly the manager wants to see as many players as possible and so the inevitable substitutions followed at regular intervals.

This had the effect of disrupting the system for the visitors and gradually Cray realised they were still very much in the game.  It was The hosts creating the chances but credit should go to the younger Angels players who kept their concentration and restricted the Isthmian Premier to just the one goal scored by their best player Anthony Cooke in the 78th minute following a cross from the right.

If you can’t win then make sure you don’t lose and that mantra was followed to the letter by a much changed Angels team who managed to deny Cray what would have been a noteworthy win.

A mention should be made of midfielder Manny Maja, one of the Angels summer intake who shows signs of being a really important player for Jay Saunders.