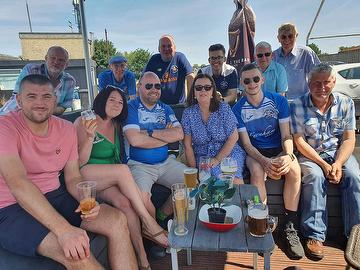 Angels made the long trip to National League North club Farsley Celtic and will have been delighted to run out 3-0 winners.

With some players missing either through injury or other commitments Angels Boss, Jay Saunders was forced to field a side with no recognised strikers although Tommie Fagg as the main target man worked really hard and was to get his reward later in the match.  He was ably assisted up top by a trialist referred to on the team sheet as “TQ”.

Farsley’s no 9 was the danger man for the hosts and as early as the 6th minute he was just off target following a mistake in the Angels defence.

Although Fagg had an effort on 18 minutes it was Farsley that looked the likelier to score and should have opened their account on 28 minutes when their no 8 fired just wide and there was more to come from No 9, 11 minutes later but the Angels defence withstood the pressure.

On the stroke of half time Farsley were awarded a free kick on the edge of the Angels area but No 10 fired wildly over the bar.  The hosts had certainly had the better of the half and Angels would have been pleased with the 0-0 scoreline at the break.

The start of the second half saw Farsley continue making the chances and it was No 9 who again was making the running but the Angels defence continued to stand tall although on 52 minutes the striker should have done much better when through with his finish woefully high and over.

On 68 minutes Lewis Card had a chance with a header but it was misdirected even though the keeper still had to claw he ball away from the danger area.

The pattern of the game was starting to change in Angels favour although the opening goal in the manner of its execution was not exactly expected.  Ben Hermitage on for Jamie Fielding took a corner and was maybe surprised to see his inswinger  go straight into the Farsley net.

Angels keeper Jonny Henly was required to make one big save from Farsley’s no 23 on 76 minutes but from that moment the game always looked like a win for the Angels. Further goals came from Mason-Saunders on 78 minutes and the hard working Fogg five minutes later.

Farsley will be wondering how they managed to lose a game so emphatically having certainly had the better of the first half, but Angels to their credit worked incredibly hard to keep a clean sheet and took their chances when they came.

Angels Boss, Jay Saunders said afterwords: “ I’m delighted with the win, not simply because of the performance but the way the boys applied themselves after a long and tedious journey up here and also because one or two players had to operate out of position.”