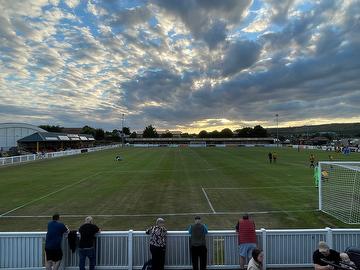 A step up in opposition; more minutes into the legs and a reduction in trialists is the process of each and every pre-season and a trip to Neil Cugley’s Folkestone is never anything less than a stern test.

A very warm day had led to a balmy evening at Cheriton Road bringing an attendance of 296 which included a healthy following of visiting supporters.

Jay Saunders selection saw his first half team extending their time on the pitch to an hour giving those playing the “opening eleven” game a few clues, or perhaps not! The substitutions brought 10 changes with only the trialist, Simeon D, playing out the full 90 minutes.

The Angels were on the front foot from the first whistle and Sonny Miles saw a header cleared from the line before the visitors went ahead after six minutes through a Joe Turner penalty after Louis Collins had been brought down.

A second goal was quickly added, when a Turner corner was headed across the face of goal for Tommie Fagg to lay a pass into the path of Collins who struck an unerring finish from 12 yards.

Tonbridge were completely in charge of the game but it took a goal line clearance from Manny Maje to deny a Folkestone effort following a free kick after 19 minutes.

In the space of a minute, just past the half-hour mark both Miles and Ben Swift saw headers cleared from the line following corners.

Into the second half and Femi Akinwande had a couple of efforts blocked and Miles saw his third headed attempt go wide before the mass substitution on hour but not before Jonny Henly having a nervous moment when he was beaten to the ball on the edge of the penalty area but, having touched the ball past the keeper, the Invicta striker lost his footing with the goal gaping.

The changes saw the introduction of four Academy lads; another unnamed trialist plus Tommy Parkinson, Doug Loft and Mason Saunders-Henry.

The changes altered the momentum of the game in the home side’s favour for a while but it was the Angels who added to their lead with 10 minutes remaining as Saunders-Henry drove into the box to pull the ball back from the bye-line for the substitute trialist to tuck home from close range.

A satisfied Jay Saunders commented after the final whistle: “First half really good, we started the game well and probably should have put a couple more away. It was always the plan to play 60 minutes and make those changes and I was really pleased with the young lads who came on. Folkestone will be up there so there were a lot of positive signs.”

So there is plenty to look forward to as pre-season continues on Saturday with the visit to Hayes Lane, Bromley where Cray Wanderers will be the opposition with a 3 o’clock kick off.