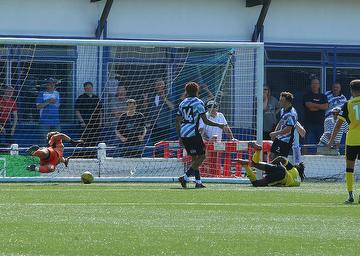 Angels enjoy their day at the seaside

Angels Boss, Jay Saunders was denied a re-visit to his old club Maidstone United in midweek due the scheduled fixture being cancelled because of the hot weather, but he was able to make up for that with a visit to another of his previous clubs, in fact up until the end of last season, Margate.

On a warm and sunny afternoon at Hartsdown Park the away side made a quick start to the game with chances falling to Akinwande, Louis Collins and Emmanuel Maja all within the first 10 minutes.

Having weathered that particular storm, Margate burst into the game hitting the Angels woodwork in the 16th minute and then six minutes later stand in keeper, Harvey Earle was forced into a fingertip save onto his crossbar.

Around the half hour mark Louis Collins might have done better with a header with ‘TQ’ having provided the cross and Collins again was in a good place in the 43rd minute to receive a cross from Jamie Fielding from the right but the opportunity was scuffed.

Just two minutes later Angels however did take the lead following good work by Akinwande, and Collins with ‘TQ’ providing. the final touch that squeezed across the line.

An Angels goal direct from a corner occurred at Farsley Celtic last week and the same thing nearly happened with Jamie Fielding’s corner two minutes after the restart but the keeper just about managed to protect his goal.  Thirteen minutes later a mistake in the Margate defence let in Akinwande but the effort was blocked.

On 62 minutes a good interception by Tom Parkinson saw the centre back pass to ‘TQ’ on the right wing.  The midfielder made quick progress before he crossed back to the Assistant Player Manager who deftly converted for the Angels second goal.

It seemed that the game may have been slipping away from the hosts but a free kick from ex Angel Ben Greenhalgh that spun across the Angels goalmouth simply needed a touch but instead rolled away harmlessly for a goal kick.

On 75 minutes Sonny Miles had a chance with a header but a minute later Margate were very much back in the contest following a ‘worldie’ from their number 20.

A surprising name on the away teamsheet was James Taylor who did so much to preserve the Angels National South status last season and by now was on the field as a substitute.  After strongly gaining possession he then made the space to force a very good save from the Margate No 1.

As the game reached its closing stages there was a chance for Akinwande but Miles was then to atone for his earlier miss by converting Fielding’s corner in the 81st minute and Angels were home and hosed.

In fact a few in the crowd thought Miles had added a 4th goal for the visitors in the 87th minute with the ball narrowly clearing the crossbar with the goal unprotected.  In fairness that would have been slightly flattering for Angels as Margate had at times played some good football and surely will be among the challengers for promotion from Isthmian Premier.

Saunders was pleased with the win and the fact that goals were scored but was slightly critical of Angels play particularly ball retention.   There is still work to be done it would seem to fine tune aspects of play and with four more training sessions there is just one pre-season friendly against Wingate & Finchley next Saturday before the season starts at Weymouth in a fortnight.