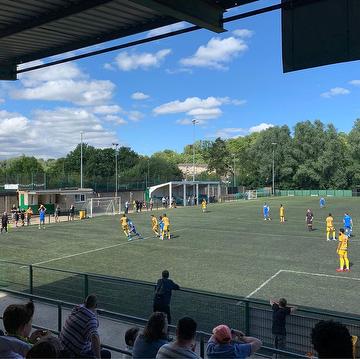 A new era begins with a win

A new era began at Church Road, the shared home of Sutton Common Rovers. A new man at the helm who has introduced eight new players (so far) and at sometime in the near future a return to Longmead Stadium will see that the hallowed turf has been replaced by a FIFA-approved 3G surface. The sun rose on Church Road to welcome in a bright new future for Tonbridge Angels.

What never changes, of course, is the support and there was a healthy following to watch Jay Saunders’ first selection play two different sides each half with the new players supplementing a core of players from Steve McKimm’s tenure and a clutch of trialists.

Ultimately, the Angels cruised to a 5-1 victory with Femi Akinwande scoring all four first half goals and in Saunders first post match interview he related: “Overall there were positives, some things that could be better but to come away injury free and get a win is always good.”

The first half Akinwande Show began after seven minutes when a ball pumped forward from the trialist left back saw the burly striker outmuscle his marker before burying a shot into the bottom corner.

Ten minutes later he rifled in the first of two 25 yarders past a despairing keeper.

The Angels were looking fluent against their Isthmian League opponents and chances arrived for Doug Loft and Tommie Fagg, whose shot was very narrowly wide.

Akinwande completed his hat-trick on 41 minutes with a goal that pleased him, receiving a pass from Loft into the left hand channel where he nutmegged his defender before slotting into the far corner from the tightest of angles. Femi later commented: “it was one of those days for me. The third one, the nutmeg, was my favourite.”

Not that his fourth, in the final minute of the half, was too shabby! Collecting a clearance, his half volley fairly rocketed into the top corner, leaving the Rovers goalkeeper clutching at thin air.

The second period saw Academy player Leo Vowles brought down in the box for the award of a 48th minute penalty but Joe Turner’s spot kick was kept out by the trailing leg of the Kasper Schmeichel look-alike SCR goalkeeper.

“Schmeichel” actually did very well in the second period making good saves to deny Lewis Gard, Turner and a particularly fine effort to thwart Louis Collins after a superb through ball from Manny Maja.

SCR pulled a goal back with 11 minutes remaining with a lob over the trialist second half goalkeeper, but Gard had the last word finishing a pass from Jamie Fielding.

It was a good run-out in the Surrey sunshine and attention now turns to Tuesday evening on the East Kent coast when the Angels visit Folkestone Invicta.