12th Man Scheme is Back! 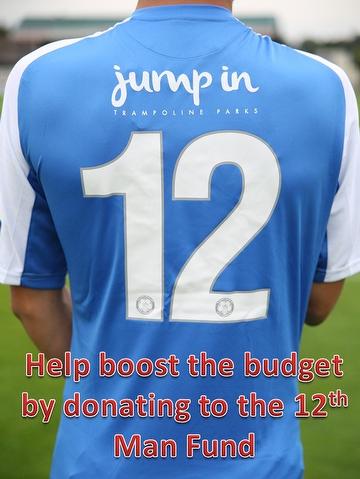 Well it never really went away - all the details right here

The 12th Man Scheme is running for a 4th consecutive season and we would like as many Supporters as possible to take part.

After all the hard work and commitment shown by everyone last season, we achieved promotion in dramatic fashion through the super-playoffs, a day we will never forget!

However, that was last season and now is when the really hard work begins. We want to be competitive in the Vanarama National League South and to achieve this, the support of the 12th Man Scheme will be vital.

Last year we raised just over £8,000 (3 times the previous year) and the money helped to pay the wages of players such as Adem Ramadan, Jack Richards, Liam King, Sammy Knott, Michael West and Tom Murphy.

This year we want to do even better and raise 3 times as much again, so we have set an ambitious target of £25,000. We guarantee that every penny raised will go into the playing budget to fund additional players and details of how your money is spent will be announced in the matchday programme.

We realise that most supporters are not able to contribute large sums but TOGETHER we can make a big difference. The best way to achieve our target is for supporters to donate by monthly standing order which some of us already do. Monthly donations start from £10 (£2.30 per week equivalent) which is about the cost of half a pint of beer a week!

To encourage monthly donations, we have introduced a few changes as follows; A monthly prize draw will take place for all supporters who make a donation by standing order. Suitable prizes (Champagne, Matchday Hospitality etc) will be announced for the winners. Supporters donating a minimum of £30 per month will be allowed access to the Executive Lounge area on match days with complimentary tea/coffee at half-time.

In addition to monthly donations, there are a number of other ways you can support the 12th Man Scheme during the season. One-off donations and Bucket Collections £500 Golden Goal Events such as Golf Day, Race Night, Quiz night etc 12th Man pre-match Lunches (details to be advised) This is your opportunity to make a real difference to the depth of the resources available to Steve McKimm. If you would like to donate by monthly standing order, please complete the attached form here and hand it to any director or John Henly (Jonny’s Dad) who is helping with fundraising. Have a great season.

Come On You Angels!