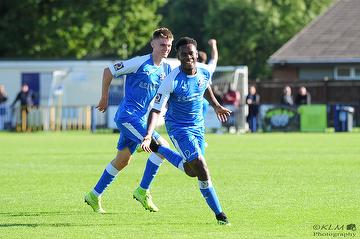 Jack Parter, Jason Williams and Khale da Costa have all agreed terms and will be wearing the Angels shirt in 2020/21.

‘Mr Consistency’, Jack Parter will  be adding to that level of stability to the Tonbridge defence as he starts his 7th campaign playing for Angels Boss, Steve McKimm.  Of course it’s not only his defensive duties that makes Jack so popular at the Halcyon Wealth Longmead Stadium, but also his partnership with Joe Turner (another player who is staying with the Angels) on the left flank that makes him the complete player.

Right winger Khale da Costa who came to the National South outfit at the start of last season is another who seems to fit well with McKimm’s plans with his pacy runs and crossing ability as well as being on hand with some vital goals.

It’s sometimes said of Angels teams of the past that they lacked strength and muscle up front.  Jason Williams supplies that in plenty but he is perfectly capable of doing the more intricate stuff as well and can work as a foil to fellow striker Tom Derry.

Said McKimm “These three players different in style and strengths provide the versatility in the squad that we need to be successful in National South this coming season.  I thank them all for their loyalty to me and the club.”