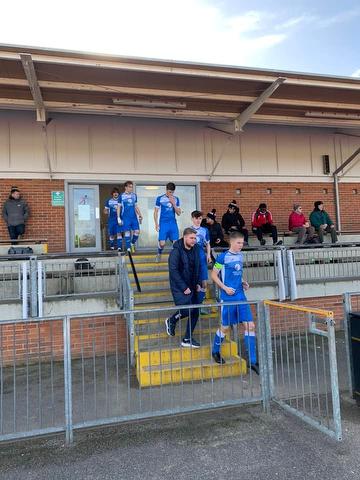 Read all the latest news from our successful Academy. Could you be part of it?

Picture and Report: Wink Tomkinson.  Picture shows the Academy taking to the field for their League Cup tie against North Leigh

February has seen the Elite squad suffer the disappointment of exiting the League Cup at the hands of a very good North Leigh side but continuing to challenge at the top of the National League Under-19 Alliance and the Academy was also able to celebrate a very proud evening.

The month made a very inauspicious start with a 3-2 home defeat to Maidstone United. Despite stringing to together an unbeaten run, Academy manager Tommy Parkinson had been warning that performances were “dropping off” and this was a defeat was a while in the making. Sadly, it was also a game that saw Kian Austin stretchered off with an ankle injury. Kian has yet to return to match fitness and we wish him well.

Unfortunately this was followed by another poor performance, this time against Ebbsfleet United, from the lower reaches of the division, on a dreadful pitch at Punjab United. A 1-1 draw with a goal by Fin Hartley was far from the desired result. But two days later, a smile was put back on Tommy’s face as a fine first half display at Princes Park saw Tonbridge race into a 3-0 lead against hosts Dartford, who came right back into the game in the second half but the Angels held on to win 3-2.

Tuesday, 15th February will go down as a landmark date for the Academy as no less than four Academy players were included in the senior squad for the Kent Senior Cup tie against the old enemy Maidstone United. Academy captain Joe Tyrie and Luca Woodhouse were named in the starting line-up with Hermitage coming off the bench as a 19th minute substitute. Tom Green also made his senior debut as a 77th minute substitute. All the lads did themselves proud with Ben even taking the Supporter’s Forum’s Man of the Match award as the club progressed in the competition with a 1-0 win to set up a tie at Welling United in the next round. Ben has gone on through the month to be called into the first team squad for four consecutive games.

The league cup defeat was disappointing in terms of exiting the competition but there was no disgrace in defeat to an excellent North Leigh side that had a 100% record this season, scoring over 100 goals in the process. The hosts romped to a four goal half-time lead as they handed out a lesson in finishing, but credit to the Angels lads who dug in to win the second half but going down 5-2. It was a long day, a 230 mile round trip to Abingdon in Oxfordshire, but we can be rightly proud of the journey to the quarter finals in a strong competition.

Two goals from Luca Woodhouse was enough to beat a decent VCD side which was followed up by a 3-1 home win against Dover Athletic and a 4-0 away win against Welling United, which leaves the Academy with the championship in their own hands. There are some vital games to come in the next month against their fellow challengers, so we can rest assured that Tommy will not be allowing any complacency!

The Development squads have had a mixture of both results and performances which is to be expected from mainly first year players. Highlight of the month was a fine 5-1 victory over Welling United in which they produced their best performance of the season with two goals each for Jack Lazell and Ryan Devlin with another from Billy Kent.

Joe Tyrie celebrated his first senior goal for Crowborough, who also progressed through to the semi-final of the Challenge Cup; Cameron Wootton made his senior debut for Tunbridge Wells and Luca Woodhouse added to his total during his successful spell at Hythe Town.

Off the pitch, there was a further trial on 14th February with lots of talented youngsters on show plus some that have already accepted places for the next Academic year. Limited spaces are still available and further trials will be held during the Easter half-term. Sign up now for one of the south east’s most successful Academies where 20 students this season have trained with the first team squad and six are playing senior first team football whilst continuing their studies towards A levels and BTEC Level 3 Sport. Click here for application form.  It should also be noted that these trials are open to both boys and girls and we presently have two girls progressing well with their studies whilst playing football.

We will be back next month with another Update, by which time the League Championship will be rushing towards an exciting climax!