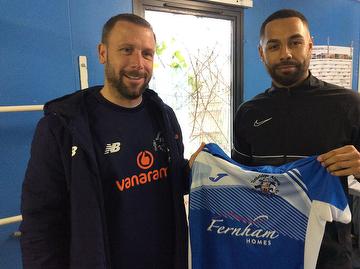 Tonbridge Angels are delighted to announce the signing of striker Adam Coombes (30) from Pitching In Isthmian Premier club, Cray Wanderers.

His youth footballing days were largely spent at the prestigous Chelsea Academy representing both the U16s and U18s.  During this time he also represented England at U16 and U17 levels. Following some injury issues he enjoyed spells at Sutton Utd, Yeovil Town, Notts County, Bromley and Welling United at which club he excelled scoring a sequence of 29 goals in 24 matches.  He was to have three separate spells with the Wings but between those also represented Billericay Town where he scored 12 goals in 26 appearances.

He joined Cray Wanderers at the start of this season and had hit the back of the net 3 times in 14 appearances before his departure to Longmead.

Angels Boss, Steve McKimm said today: I am very pleased to have obtained Adam’s signature meaning we now have another proven goalscorer at the club.”