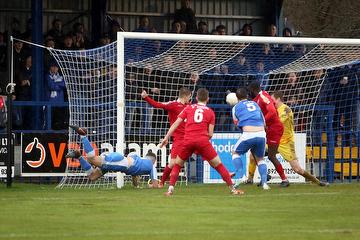 None of the 383 spectators attending the Vanarama National South match between Angels and Hungerford Town on 15th February 2020 would have realised at the time that supporters were not going to have the opportunity to watch 1st team home games for the remainder of that season, and, for as yet, an undefined period in 2021.

The match itself was somewhat unremarkable aside from the fact that it was an achievement the game went ahead in the first place.  Drainage problems combined with the onset of Storm Dennis meant tricky playing conditions were inevitable, but the referee in consultation with both managers decided to give it a go on the basis that abandonment might have to be an option.

In the end both managers were probably happy to share the points with a 1-1 draw.  Both goals owed something to the weather conditions with Joe Turner heading in Ben Greenhalgh's corner in the 5th minute while on 51 minutes Matt Jones squared things up when his corner swerved directly into the Angels net.

While matches at the time were still being postponed due to the Angels' pitch issues, that situation soon became overtaken by the national crisis that was the Coronavirus pandemic.  The leaque for 2019/20 was eventually formally ended with Angels placed into a final 15th place on an unweighted points per game basis.

With a year gone, we still have no clear idea when supporters will be allowed back in the stadium to watch 1st team games or indeed under what conditions.  As those 383 spectators made their way home just before 5:00pm on that wet and windy afternoon or perhaps dived into the clubhouse for a swift half, who on earth could have imagined what was about to ensue over the next 12 months.