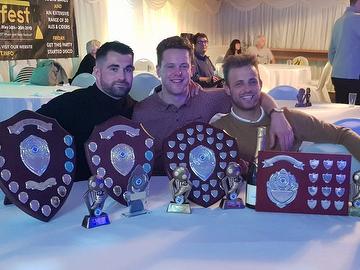 Who won what at the end of season celebrations

It felt like everyone who attended the Angels End of Season Awards Evening was a winner, after all if your club has just won promotion in the most dramatic fashion then all  want to celebrate and have some fun. But of course quite rightly the Awards must be handed out and so here follows a list of the winners in each of the categories together with runners up.

Clubman of the Year - Peter Brown

Many congratulations to all who won awards, but in the end as both Chairman Dave Netherstreet and 1st Team Manager Steve McKimm pointed out the success of the club is down to everyone involved with Tonbridge Angels FC.