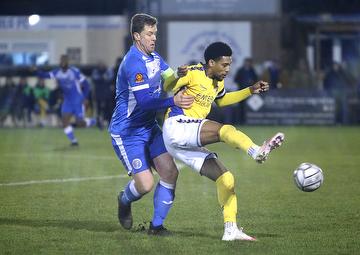 But lack of finishing denies victory

Tonbridge Angels squandered fantastic chances as they were held to a 0-0 draw to St Albans City at the Longmead Stadium on Tuesday night.

The opening quarter of the game saw little action as both teams were unable to get a grasp of possession. Angels made their attacking intentions clear, aiming to capitalise on St Albans’ high defensive line with balls over the top which worked well throughout the game and led to most of Tonbridge’s chances.

This tactic almost brought Tonbridge a penalty in the 23rd minute as Joe Turner’s ball over the top was taken supremely by Ricky Modeste, his heavy touch took the ball away from him as Alex Lankshear brought Modeste down. The referee judged Modeste to be out of possession and waived the foul off.

Angels should have opened the scoring minutes before halftime following a superb piece of skill from Modeste. Jerry O’Sullivan played the ball on the touchline to Modeste, who flicked the ball over Lankshear with the outside of his boot before running onto it and sending a pinpoint cross to Tommy Wood in the box. Wood misjudged his header with the ball going over the bar.

St Albans created their only chance of the game in the 60th minute as Zane Banton collected the ball on the left wing and shot from the edge of the box. Jonathan Henly was on hand to dive confidently to his left to parry the ball away.

St Albans began to hold more possession, but it was Tonbridge who had the better chances to open the scoring. Lankshear had more trouble on the wing, as O’Sullivan whipped in a ball which Wood was unable to direct goalward.

Tonbridge’ defence was resolute, with captain Sonny Miles leading the line on his 450th appearance for the Angels and stopping any of St Albans’ advances. Indeed, St Albans’ best opportunity came from a mistake from Henly who failed to control a back pass, but managed to perform a tremendous Cruyff turn before Shaun Jeffers could make a challenge.

The final 10 minutes saw a flurry of Angels chances. Modeste put in a man of the match performance and was at the centre of every Angels attack, this time serving Joe Turner with a fabulous cross, which was headed wide.

The best chance of the game fell to Turner in the 90th minute following an outstanding turn of pace from Ibrahim Olutade, beating three defenders before sliding the ball to Turner. Turner turned his body to shoot just as St Albans’ goalkeeper Coniah Boyce-Clark made the interception to save St Albans a point.

Tonbridge remain 18th in the league on 13 points with this draw and play away to Slough Town on 4 December.

Picture: No way through!  National South top scorer Shaun Jeffers for St Albans City has a quiet night up against Angels skipper, Sonny Miles on his 450th appearance for the club. Credit: David Couldridge