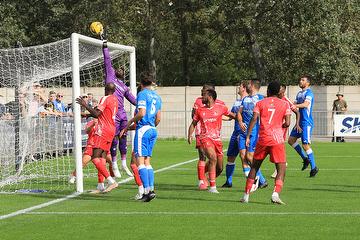 There was no magic of the FA Cup for Tonbridge Angels at the Skyex Community Stadium as they slumped to an embarrassing 5-0 defeat at the hands of Southern League Premier South leaders, Hayes and Yeading United.

A bitterly disappointed Steve McKimm held up his hands to being beaten by a better side but also adding that he felt he had been let down personally. He had wanted to replicate last year’s run to the First Round for the supporters who were denied their places at Longmead but it was not to be, in what could only be described as a second half horror show.

The opening 10 minutes or more had little to suggest how the afternoon was going to eventually pan out. The first warning shots came after 12 minutes when Dinesh Gillela surged from a full back position to force Jonny Henly into his first save of many during the afternoon, quickly followed by Moses Emmanuel’s effort that narrowly went past the far post.

The Angels responded and H&Y’s goalkeeper, Raven Constable, saved well from Tommy Wood with Tom Beere shooting the rebound over the bar.

After 20 minutes, Beere saw his shot dangerously deflected but Constable did well to recover and save.

Three minutes later, the Angels should have fallen behind when Francis Amartey was sent clear, rounded Henly but was denied by a miraculous goal line save from JJ O’Sullivan.

Tonbridge thought they had a good claim for a penalty when Harry Hudson appeared to be hauled to the ground following a corner but a minute later the ball broke to Amartey 20 yards from goal and his shot powered past Henly.

The game continued to be evenly contested and Beere was desperately unlucky when a free kick from 20 yards crashed down from the underside of the bar before being cleared to safety.

Henly saved well from Emmanuel but the game entered into the break with Hayes a goal to the good but with the Angels still completely in the game.

The second period started with the Angels searching for the equaliser with Beere testing the goalkeeper but a lightning break down the right from Amartey ended with a cross to Emmanuel whose first effort was brilliantly saved by Henly but he could do nothing as the rebound was forced home.

In the course of five minutes, McKimm made a treble substitution bringing on Ibrahim Olutade, Jamie Fielding and Zak Guerfi but it failed to stem the tide and Henly had to be at his very best to deny Hassan Jalloh twice in a minute.

But another pacy break saw the Angels cut apart as Amartey and Omar Rowe set up Jalloh to score from close range and effectively end the game as a contest.

So this year’s FA Cup run was brought to an end before it really started and now players and management face the difficult job of picking themselves up, dusting themselves down and starting again with the imposing task of the visit of Dorking Wanderers next Saturday.