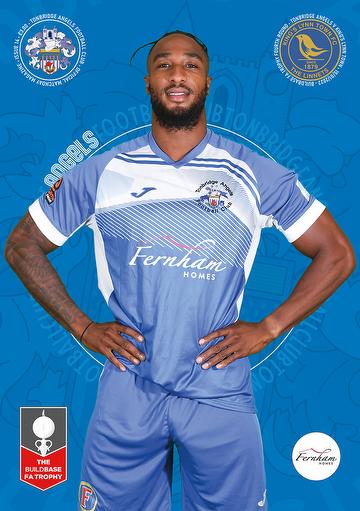 McKimm ‘Of course its winnable, it’s a one off game’

Never before have Tonbridge Angels reached the last sixteen of the FA Trophy, but that's what is at stake when National League King's Lynn Town are the visitors on Saturday.

Steve McKimm said: "We're excited about it and confident about it but make no illusions, they're a good side, full-time, they've got some good players   Of course it's a winable tie, it's a one-off game, so whatever happens we'll do anything we can to get us through."

Three of the last four FA Trophy finals have involved a club below the national league top division, including last season when Isthmian league Hornchurch won the competition, but Steve isn't even thinking about Wembley, nor will he.

"The time to talk about Wembley is when you get to Wembley.  There's no point talking about it miles before you get there, even if you get to the semi finals.  You put yourselves up for a big fall.  When a team has the good fortune to get there, you talk about it on that day, but we're focusing on King's Lynn, and if we get through we'll think about the next one and so forth."

Adam Coombes is unavailable having already played in the competition, and Doug Loft begins a three match ban.  Steve had hoped to overturn Doug's red card, but without success:

"We appealed Doug's red card.  It was something of nothing.  The referee on Saturday said he couldn't believe it wasn't overturned.  He's got a three game ban, but it's Saturday-Tuesday-Saturday and he'll be back after that.

He said:  "Ricky's injury was estimated eight to twelve weeks.  We're seven weeks in.  He won't be having an operation, which is good news, so mid-February he could be back training and back playing by March fingers crossed."

Please click here for match tickets and to pre-order our award winning programme - cover above.

Steve McKimm was in conversation with Matt Davison.