Angels lose their way at Braintree 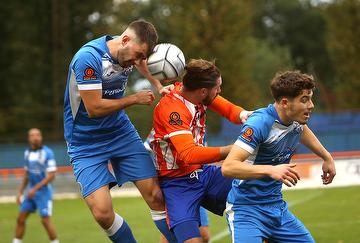 Too many players off the pace

Angels dropped to 17th in the table following this defeat at the Dunmow Group Stadium while their hosts moved off the bottom to claim 19th position. More worryingly for Boss,Steve McKimm will be the fact that his side are now the joint lowest goal scorers in the league alongside ironically their hosts today; Angels have hit the back of the net just 12 times this season and to be honest based on their performance today a remedy still needs to be sought and quickly.

McKimm decided to freshen things up front going with Smith-Joseph and Olutade as the strike force with Tommy Wood dropping to the bench.  Tom Beere replaced Doug Loft in midfield with the manager perhaps taking into account Tuesday’s fixture against Havant & Waterlooville.

Despite the closeness of the final scoreline, Braintree deserved their win.  There was little to choose in footballing quality between the two sides but put simply Braintree appeared to have a greater desire and basically did more to win the game. Too many Angels players quite simply didn’t rise to the heights they are capable of.

A first half of few chances to either side saw the hosts a goal up at the break thanks to Kyran Clements.  A free kick to Braintree was headed on and there was the defender to calmly place the ball past Angels keeper Jonny Henly.

What opportunities there were mainly fell to The Iron with two efforts from ex Angel Khale da Costa and the lively Femi Akinwade forcing a decent save from Henly on 40 minutes and five minutes later nearly embarrassing the keeper with a lob that Henly was equal to.

As for Tonbridge it was largely a forgettable 45 minutes with the one moment of true quality a free kick from Joe Turner to Ibrahim Olutade who turned well in the box got his shot way but was foiled by a defenders block.

The second half saw a decent header from Cooper for the home side on 55 minutes but the game was largely fought out in midfield areas with neither side making any genuine headway towards increasing the scoreline.

Suddenly Tonbridge did remember they were behind and started to exert some pressure and on 67 minutes following a corner it looked as if Tommy Wood was certain to draw the sides level but somehow the home defence scrambled the ball to safety.

The game became more stretched as the minutes ticked down and both sides had chances to score but Braintree perhaps came closest to making the game safe.  After five minutes of stoppage time referee Cartmel brought proceedings to an end much to the relief of the home support.

Afterwards, Angels Manager Steve McKimm said : “We were collectively poor 1st half and although there was some improvement after the break, the damage had been done.”