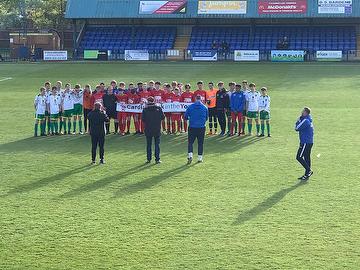 Four teams will compete in the Kent Youth League

The Kent Youth League’s season came to an abrupt end along with other leagues in March, but in truth, had suffered worse than senior leagues with the weather since Christmas leaving many clubs with a backlog of fixtures.

But that was season 2019/20 and clubs, and very much our own, are starting to look forward to next season whenever that may be.

For 2020/21, let’s think positive that we will be starting this year, we will be welcoming Tonbridge Juniors Under-12’s into the Tonbridge Angels family as our Kent Youth League Under-13 representatives. The side is managed by Pat McDonnell and were enjoying a successful season in the Maidstone League and were on course to win it before it was brought to a closure.

Pat will be bringing the nucleus of his side into the KYL but that doesn’t mean that he is not looking to strengthen with the knowledge that the league is a big step up. They have set up their own Twitter profile @AngelsU13s and, whilst trials are obviously off the agenda at the present time, they are inviting interested players to register their names so that the information can be directed to them when the time is appropriate. So, if you are looking to join a progressive club with a great pathway whilst enjoying your football then get in touch with Pat by email patmcdonnell@blueyonder.co.uk

Pat has enlisted the support of Angels Under-16’s (I can’t believe those lads are playing Under-16 football next season!) manager and Academy coach Dominic Welsh who will be helping Pat with the coaching on a fortnightly basis. Training will be twice a week on 3G pitches.

Steve Turner will once more be leading, what is now, the Under-15’s in the KYL. Training will be twice a week on 3G with the Wednesday session taken by an academy coach and Fridays. If you are looking for Under-15 football at Tonbridge Angels next season then email sirstevet@talktalk.net to register your interest.

Dominic Welsh takes his lads into the Under-16 age group with an added confidence on the back of an encouraging, if truncated, campaign in 19/20. Dom is looking to add a limited number of players to his squad and should you feel that, in Dom’s words, you are a player that is committed, driven and looking to buy into the ethos and style of his team, then email domwelsh99@yahoo.com

Dom is also looking to add a coach to work alongside himself and Bayley Colbran (Langney Wanderers Under-23 manager). This role would suit a young coach who is looking to add experience to their coaching career. He would also like to enlist the support of a goalkeeping coach.

Todd Tyrie, will being taking his lads into the Kent Youth League Under-18’s section next season. Todd has seen no fewer than eight of his Under-16 side successfully obtain places at Tonbridge Angels Academy for the next academic year. A wonderful testimony to the work he, and his coaches, have done with this group of lads since they entered the KYL set-up five seasons ago.

Tonbridge Angels Youth Section is very much chomping at the bit, awaiting the Government’s go-ahead to restart and put into action the exciting plans all the year groups have for next season.

All the teams have a Twitter profile: @AngelsU13s @AngelsU15s @AngelsU16s @AngelsU18s so follow them to keep bang up-to-date with the news from each camp.