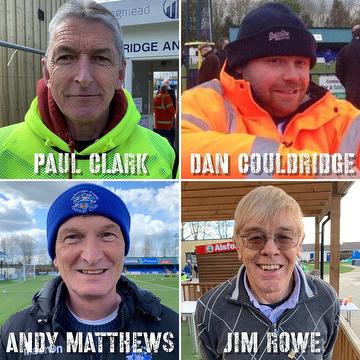 Thank you to everybody that submitted a nomination, we had 18 different people nominated and each one was a worthy nominee. But, there can only be four candidates that progress to the final vote and they are (in alphabetical order):

Paul Clark: Paul has been associated with the club for over 40 years and was on the Supporters Association committee. He has volunteered and worked at the ground for many years, as a steward on match days and was also previously head steward.

Dan Couldridge: Dan has been nominated not only for his work as the editor of our award-winning programme but also for his work in launching the streaming that was vital to both the club and its supporters during lockdown.

Andy Matthews: Andy works tirelessly as one of the ground staff team that spend at least two days a week at the ground as well as time spent on match days. Without Andy’s help it would have been difficult to prepare the pitch for Under-18 games this season.

Jim Rowe: Jim’s work for the club as Press Officer is unstinting He has been a Board member and secretary at Board meetings and he has dealt with the many communications issues that have arisen over the years. He has also managed to interview Steve McKimm after most matches, no matter how grumpy the manager has been!

To vote for your nominee, please email wink.tomkinson@tonbridgeangels.co.uk or place your vote in the suggestion box that is positioned on the media tower at any of the three home games in April. The closing date will be Friday, 29th April