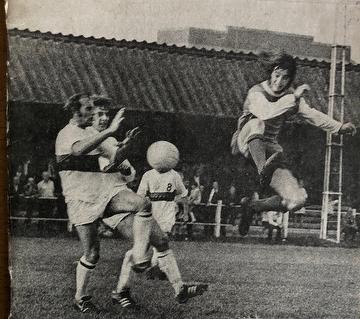 A regular goalscorer with five in one game

Sad news has been received of the passing of former player Barry Marchant at the age of 72 following a short battle with cancer.

Barry signed for The Angels in October 1969 from neighbours Tunbridge Wells where he had played as an amateur.

After leaving Dover, he played at Ramsgate and Folkestone before returning to Tunbridge Wells in 1975.

In March 1971, ironically against Barry Town, he scored five times in a 6-0 win. In that same season he was the club’s leading scorer with 14 goals.

Just to jog the memories of some of our more senior supporters Barry famously wore this hair very long and had extraordinarily lengthy sideburns.   Away from football he worked as a postman.