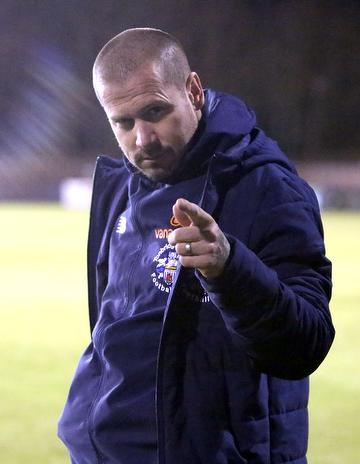 Angels and The Fleet both need the points. Come to Longmead for a huge Kent Derby!

We could confirm safety when we play Ebbsfleet United on Saturday.  If we better Billericay's result against Bath we will guarantee another year in National League South.

However we welcome an Ebbsfleet side who have not only secured a play-off place, but also handed out a footballing lesson on the opening day of the season against us.

Speaking before training on Thursday, assistant manager Barry Moore said:  "The first game of the season won't be forgotten by the players, the staff, and the supporters.  They were fantastic on the first day of the season, and any team who played them that day would have been in trouble against them.  But since Christmas we have picked up, although we're not as consistent as we would have liked.  After Monday the boys should be confident.  Ebbsfleet have got something to play for.  We've got something to play for, it should be a big  crowd and I'm confident we can get a positive result."

Barry also feels despite securing play-offs with their win at Concord on Monday, Ebbsfleet will have plenty of motivation as the clubs jockey for position in the play-offs:

"They want to get second or third which guarantees them a home game and a place in the semi-final which as a full-time club that's going to be their minimum requirement.  Anything below that and they have to play a quarter final.  They're one of the best footballing sides in the league but it's our job to stop that.

"We've done our homework on them and what they're good at.  We've mixed formations in the last three or four months.  Everyone should be fit so maybe we'll mix it around.  James Taylor should be fine now and he's back in contention, Woody's 50-50 so we'll see how he is."