Ben Greenhalgh signs for the Angels 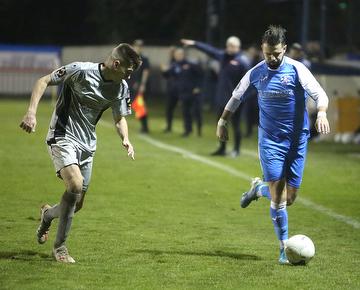 Ben Greenhalgh (27) has turned his two month loan spell at The Halcyon Wealth Longmead Stadium from Dartford into a permanent move.

Having already made nine appearances with one goal, Angels supporters will have had every opportunity to see how his intelligent movement both on and off the ball causes genuine problems for opposition defenders and allows his teammates the space to get into good positions.

Steve McKimm said : “I’m delighted that Ben has chosen to stay with us. He has fitted into the squad extremely well and will be a vital component as we seek to move up the National South table through the second half of the season.”

Our picture by Dave Couldrige shows Ben on one of his trademark runs down the wing when playing against Chippenham Town 04.01.20.