BT Sport to remain the home of the National League 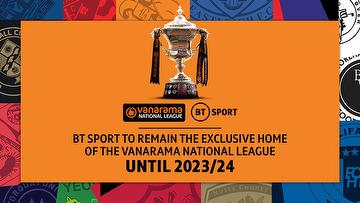 BT Sport has renewed its exclusive rights to broadcast the Vanarama National League for a further three years, until the end of season 2023/24, with more games set to be broadcast than ever before.

BT Sport has been broadcasting live and exclusive coverage of English football’s fifth tier since 2013. The new deal will see matches broadcast live each week, in a regular Saturday slot.

Alongside the weekly live match coverage, the BT Sport team bring fans every goal from every National League match in the weekly Vanarama National League Highlights show. The show is created through an innovative link between BT and students associated with selected National League clubs who receive broadcast training from BT to go on and help create the show.

Simon Green, head of BT Sport, said: “Over the past few years we’ve developed an innovative relationship with the league, including world-first 5G-enabled remote broadcasts and training local students who help create BT Sport’s National League highlights shows. The National League remain a valued partner to BT, particularly during the pandemic, in staging last season’s playoff matches and the 2020-21 season.”

Brian Barwick, chairman of the National League, said: “"We are delighted to continue our partnership with BT Sport. Their coverage of the Vanarama National League has been simply outstanding.

“Informed and comprehensive, our League has been broadcast in a highly polished and professional fashion. A lot of hard work over the last past seven years has produced some exceptional television.

“The new three-year contract will take us into over a decade of coverage by BT Sport. This speaks volumes for the confidence we have in how our matches have been brought to an established and growing audience”.

Fans of non-league football have more ways to watch on BT Sport than ever before, on TV, through the BT Sport app on smart TVs and games consoles, mobiles and tablets.

Virgin and Talk Talk. BT Sport is also available online and via the App on mobile and large screen devices and operates pay per view channel, BT Sport Box Office. BT Sport has a track record of innovation, operating from one of industry’s most sophisticated sports TV studios, and delivering world-firsts around Virtual Reality, Dolby Atmos, 4K UHD and remote production. Its achievements have been recognized with awards from IBC, Promax, Music Week and more.

BT Group is the UK’s leading telecommunications and network provider and a leading provider of global communications services and solutions, serving customers in 180 countries. Its principal activities in the UK include the provision of fixed voice, mobile, broadband and TV (including Sport) and a range of products and services over converged fixed and mobile networks to consumer, business and public sector customers. For its global customers, BT provides managed services, security and network and IT infrastructure services to support their operations all over the world. BT consists of four customer-facing units: Consumer, Enterprise, Global and its wholly-owned subsidiary, Openreach, which provides access network services to over 650 communications provider customers who sell phone, broadband and Ethernet services to homes and businesses across the UK.

British Telecommunications plc is a wholly-owned subsidiary of BT Group plc and encompasses virtually all businesses and assets of the BT Group.  BT Group plc is listed on the London Stock Exchange.