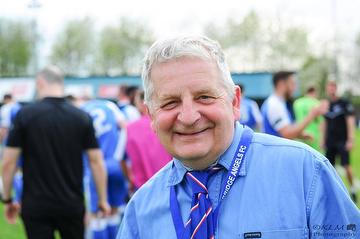 Dave Netherstreet outlines the challenges past, present and future, and some successes

I think we were all aware that our first season in the National League South was not going to be easy but we had little idea of the non-footballing issues that nearly derailed the club and that it was only due to the marvellous response from the club’s fans, supporters and well-wishers that it has managed to stay afloat.

The problems with the pitch are very well documented and the irony of getting it passed as fit for play, for a Tuesday night game, at 1pm on the Monday before the game only for the league to be suspended at 2.30pm the same Monday was worthy of a play.

Where are we now?

The pitch is looking in good condition and has just been top dressed with 80 tonnes of Rootzone, a mixture of soil and sand, and then re-seeded, with the low areas being gradually built up.

Despite the disruption caused by Covid 19 there has been progress in the work being done   by the working party set up to investigate the possibility of the installation of a 3G/4G pitch.  Under the chair of Phil Broad, the group was split into two phases. The first was an appraisal and fact finding investigation in which five clubs responded to our request to answer an in-depth questionnaire on the implementation of an artificial surface at those clubs. These showed, interestingly, that every one of those clubs had followed a different path with regards to groundworks and finance. The second phase will be to complete a costing, grant finding and feasibility assessment and I would like to put on record my thanks to Phil Broad, Nick Fuller, Richard Palmer and Roberto Sardelli for their time and effort in this Report.

It was always recognised that the installation of an artificial pitch was likely to be a long term project and so as discussed and presented at the Special Owners meeting back in March the club will be purchasing covers to protect the pitch.  You, the supporters have been incredibly generous in donating money towards these so much so that we are now only a couple of thousand pounds short of meeting the purchase price of the covers.  If anyone out there would still like to help in this purchase then please contact me dave.netherstreet@tonbridgeangels.co.uk

Due to the uncertainty of whether or not the 19/20 season was going to be completed and now the unknown start date for the 20/21 season it has been difficult to programme the proposed additional drainage works. There is a need to apply for grant funding which is not easy.  No grant is available for the purchase of pitch covers though drainage works for pitch improvements will be considered.

Financially the club has taken advantage of two grants that have been made available one from the government in the form of a rates re-payment for small businesses and a pitch preparation grant of £1,500 from the FA , there is also a £500 grant for the provision of complying with the Covid regulations.  The club has also accepted the early payment from the National League of the monies that are normally paid in September.  No loans have been applied for as it has been considered that with careful management the funds that the club have will be adequate to meet its obligations until the new season starts however should the need arise a Bounce Back Loan will be applied for.

There is no income from events or the hiring of the club’s facilities at the moment though Slimming World are looking at restarting next month.  All events such as the Garden Show and Angelfest were cancelled, wedding receptions and parties have also fallen by the wayside it is difficult to say how much income has been lost.

The club has also refunded deposits from hirers on request and season ticket refunds have been paid, again when requested .

The club has drastically cut its overheads and has also managed to settle or agree re-payment plans with its creditors.

Still on the subject of finance over £32k has been raised though Ownership subscriptions through last year boosted by conversion to Grandees and some of our supporters enrolling for the first time into the membership scheme.   There are now 282 members an increase of 41 during the last financial year.   It’s a huge thank you to everyone for this enormous effort without which the financial position of the club would undoubtedly have become quite perilous.

Preparing for the new season is difficult with no confirmed start date but you will have seen from the website and social media that Steve McKimm has been very busy assembling a squad together.

We have been very lucky that Steve, and the majority of his management team have agreed to stay for the new season and many of last season’s players have also indicated that they would like to continue to play for the club.

When is the league going to restart?  This is a question that just cannot be answered at the moment.  As a club, and indeed any non-league club,  we cannot play behind closed doors and even with restricted crowd numbers, if this is enforced, it will be very difficult, but we will adhere to whatever conditions the authorities decide upon that allows our supporters to enjoy watching football again in a safe and enjoyable manner.

Some of you have suggested that the Marquee and the field behind should be opened up as a socially distanced beer garden and of course there are fond memories of the successful FanZone but we are in a very different World now.  It is certainly true that we have the space to meet the government regulations and we have carried out a thorough risk assessment but the Board considers that the cost of meeting the safety requirements together with a limited footfall would not make such an operation financially viable and we have to be guided by that.

The development of the compound area has been delayed because it has been difficult to clear the site due to the restrictions imposed though it is now hoped that works will commence by September this year.

Kit for the new season:- Normally the club would be unveiling a new kit but this season  it has been decided to keep the same style of shirts and we will thank the NHS on the home shirts and support Tonbridge Baptist Church’s foodbank Sustain on the away shirts.  We are asking for individuals to if possible sponsor the shirts which can be done for £500.  If you want to buy a shirt they will be available to order quite soon and details will be on the club’s website.

I am sorry that it has taken a bit of time to put this together but the shutdown has not lessened the work to keep the club going.

I would like to thank everyone involved with the Angels and the support that has been given which has helped to keep the club going through these very difficult times.