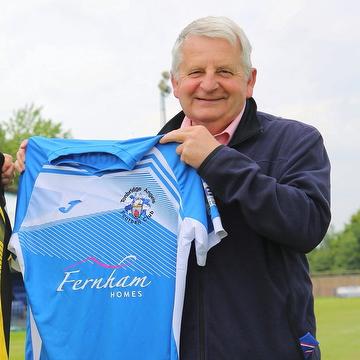 On the eve of the 2021/22 National League South season, Tonbridge Angels Chairman Dave Netherstreet takes stock of the last 18 months and looks ahead to the future

TAFC rely on sponsors, events, benefactors and of course gate receipts from matches and provided none of these are interrupted, I’m confident that the club will be sustainable for the season. I hope the worst is behind us, but who knows? We’ve been positive – players are on contracts, season tickets are on sale, we have sponsors and events are being organised.

The biggest physical change at the ground is the new Upz and Downz building. This should have been completed before the start of the season but for various reasons – mainly shortage of materials – it will not be up and running until probably October this year.  The Terrace Bar has been refurbished and revamped for use by sponsors and for business meetings.

In addition to that, the cellar adjacent to the main bar had to be re-roofed and has been refurbished with the help of Heineken and CocaCola, who have supplied and installed new drinks dispensing equipment.

The toilet block at the rear of the South Stand has had to be demolished as it was found that the floor had rotted away and the metal framework of the building had rusted, leaving it beyond repair. We have yet to replace it, but it is on the agenda. In the meantime, it will be necessary to use the toilet block by the marquee.

Elsewhere at Longmead, a cool store has been constructed in the room behind the North Stand, while the club has also upgraded its internet at the ground.

The club is in discussion with Tonbridge and Malling BC for a lease extension and is looking at the installation of a 3G/4G pitch together with new floodlighting and further ground improvements.

During the lockdown the club has worked with Tonbridge Baptist Church and Upz and Downz, while we’re also supporting charities such as CRY, Tonic Mental Health and most recently Tommy’s. It’s very difficult for us to provide support for all the charitable organisations that approach the club, and sadly we do have to disappoint many who contact us.

The management team has been very busy over the summer. Unlike many clubs, here at Tonbridge the manager is given a budget and it’s up to him organise which players he wants. I’m delighted that eight of last year’s squad are still with the club, and I’m sure that Steve will have a squad that will be competitive in the National League South.

Season targets are always difficult and have to be tempered with reality. The club has to achieve the most it can, and if that puts us into the playoffs then that would be fantastic. The club’s minimum target is to consolidate our place in the National League South.