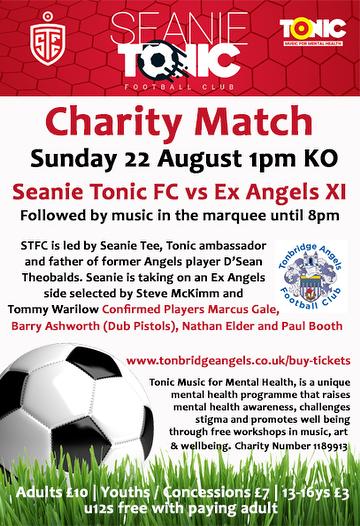 Taking place on August 22nd 2021 at Tonbridge Angels FC, the fundraiser sees Seanie T host a ‘Charity match for Mental Health’, with a 20 strong team of veterans, celebrities, musicians, actors & artists, including Marcus Gale ( Wimbledon, Watford & Brentford), Micah Hyde ( Coaching staff - Barnett & QPR), actor Shane Attwooll (Films: Wonder Woman 1984, Legend & Kingdom of Heaven), Artist & Tonic Patron Barry Ashworth (Dub Pistols) Flinty (Ragga Twins) with more to be announced in which we will see them swapping their musical talents for their prowess on the football pitch when they come up against a team of ex Tonbridge Angels stars selected by current manager Steve Mckimm and previous boss, Tommy Warrilow; so far confirmed as playing are Paul Booth and Nathan Elder   The Angels play in the sixth tier of English football and are wholly owned by their supporters.

Spectators can expect a fun filled family day with evening entertainment whilst raising awareness for Tonic Music for Mental Health and the Recovery Through Music programme which will allow the charity to continue providing free, direct, practical mental health support on journeys of recovery.

Tickets now on sale by going to https://www.tonbridgeangels.co.uk/buy-tickets

“Since the honour of being made a Tonic for Music Health ambassador, I have thought of various ways to help raise awareness for such a great cause because of all the fabulous work they are doing for people, So I have taken two things that I love the most in life outside of my family which is Music & Football & combined them to raise awareness for mental health.

I have been involved in football since I started playing Sunday league at the age of 6 & I am still coaching now. I am a FA qualified coach & I have won every major honour in Sunday league football.

My sons play football so even when I want to take a break from it I can’t.

I’m also making music & touring various parts of the world & I’m not sure if I can stop to tell the truth. Football & music are my passions so it makes perfect sense to me to try to put on such an event with the help of Tonbridge Angels FC to support Tonic Music for Mental Health and the vital work they provide to people with their wellbeing.”

“We are delighted to be supporting such an important charity as Tonic Music for Mental Health. These issues affect people in all walks of life and football is no exception. Whilst we hope everyone will have a lot of enjoyment, behind all of this is the aim of raising valuable funding for a very worthwhile initiative.”