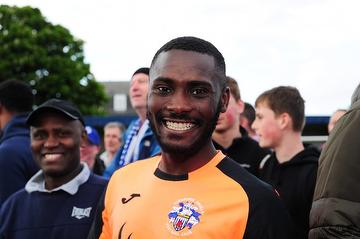 ......and will continue to do so as striker signs for next season

Chinedu McKenzie (24) will be an Angels player in 2019/20 agreeing terms with the club today.

A popular player who operates with a smile on his face, Chin was signed in January from Haringey Borough where he had been part of their successful FA Cup run to the First Round Proper.   Arriving at Longmead at a difficult moment in the Angels campaign with a worrying loss of form, Chin quickly became an integral part of the New Year revival that saw the Angels eventually claim a play-off berth and, as they say, the rest is history.

With a scoring rate of 12 goals in a total of 24 appearances Chinedu will be looking forward to testing out those National South defences.