Christ Tiehi signs for the Angels 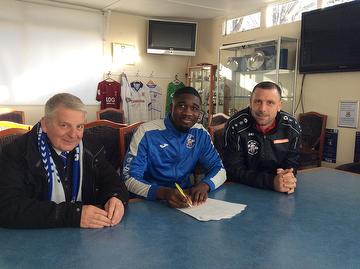 Christ Tiehi has signed a deal with the Angels that keeps him at the Kent club until the end of this current season.

A French born midfielder he joined the Angels on 11th October from National League Club Woking.

Angels Boss, Steve McKimm said today : “I’m delighted that ‘Christie’ has decided to stay with us at least until the end of this season.  He is more than filling the gap created by D’Sean Theobalds’ departure and I believe he will play a significant role in the Angels league campaign as we aim to consolidate our position in our first season back in National South.”

A youth product of French second tier side Le Havre from 2009, he made his 1st team debut for the club in last season's Coupe de la Ligue, the French equivalent of the League Cup, making two substitute appearances. Christ is an Ivory Coast youth international and featured at the 2017 Toulon Tournament, reaching the final, in which his team lost on penalties to England. His tournament also included a goal against Wales in the group stage.

Christ made his debut for the Angels in the National League fixture against Braintree Town on 12th October 2019 coming on as a second half substitute.