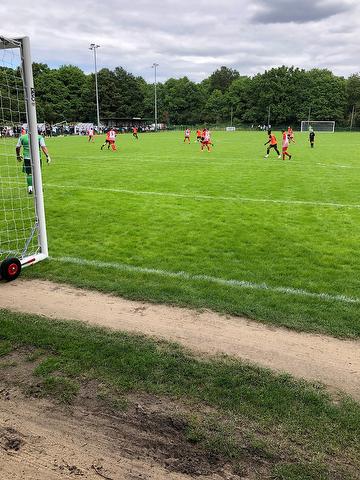 2-0 win to The Angels as at last Supporters allowed to watch a game. Post Match interviews with Barry Moore, Ibrahim Olutade and Jerry O'Sullivan.

Tonbridge Angels came away from Colliers Wood Utd of the Combined Counties League Premier Division with a 2-0 win courtesy of a Tom Beere free kick early in the first half and a Joe Turner penalty midway into the second period.

It was perhaps the occasion rather than the performance on the pitch that was the vital element to the afternoon. With Angels supporters allowed to come to the match for the first time in approaching a year it created a completely different and positive atmosphere to proceedings.

After the game Assistant Manager, Barry Moore, commented that it was at this stage all about fitness levels and one had to remember some players had barely played any football for over a year. He added: “There are likely to be a couple more signings but certainly we are now in a position to obtain players that other clubs have also had an eye on, so that’s pleasing.”

Supporters will have been delighted to see both Beere and Turner get on the scoresheet; both players looked sharp while striker Tommy Wood was a constant threat.  All will be working hard on their fitness levels in time for the big kick off on 14th August.