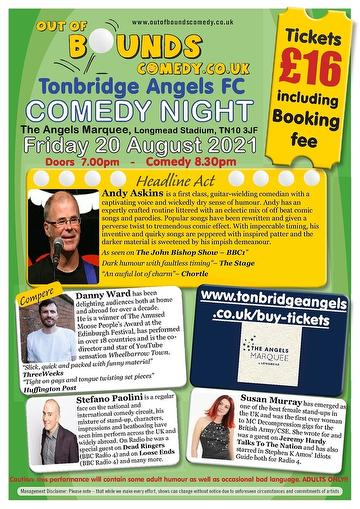 In conjunction with Out of Bounds Comedy the 2nd Comedy Night at The Angels Marquee takes place on Friday 20th August with doors opening at 7:00pm.  Fully licensed bar.

Headline Act is Andy Askins, a guitar wielding comedian who has featured on BBC1's The John Bishop Show.  Also appearing is Stefano Paolini who has performed across the UK and abroad as well as guesting on BBC4's Dead Ringers and Loose Ends, and Susan Murray who has emerged as one of the best female stand-ups in the UK.  The show is compered by Danny Ward who has been delighting audiences both at home and abroad for over a decade.

Tickets are just £16.00 and can be purchased by going to the Angels ticketing portal. Please click Here.  Regret No Children.