Dartford to Tonbridge - A Modest Journey 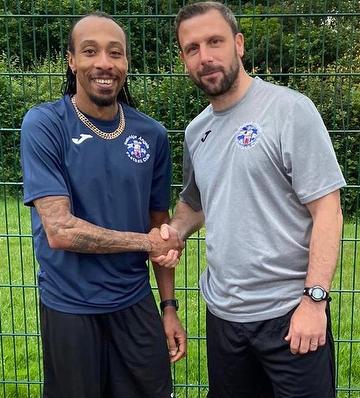 Angels Boss, Steve McKimm continues to go for experience as he builds his squad for 2021/22 campaign with the signing of Ricky Modeste (33) from fellow National South club Dartford.

A pedigree non-league player as well as a Grenadian international, Ricky played in youth sides at Charlton Athletic, Arsenal, and Rushden & Diamonds, before graduating to men’s football initially at Chelmsford City and more recently Billericay Town.  However, it was to be at Dover Athletic where, so far, he has arguably enjoyed the best years of his career.  In two spells at Crabble he amassed around 200 appearances with over 30 goals.  He will be fondly remembered by Whites supporters for scoring twice in the 2013/14 Conference South play off semi-final win against Sutton United and then setting up Nathan Elder for a winner against Ebbsfleet Utd in the final.

His international career has seen him turn out for Grenada on 8 occasions scoring twice for The Spice Boys.

McKimm said today: “Ricky has consistently done well against sides I’ve been involved with in the past but despite that I’ve always enjoyed a good relationship with him.  He’s played at the highest level of non-league football as well having international experience and I’m really pleased to have him now playing for me.”