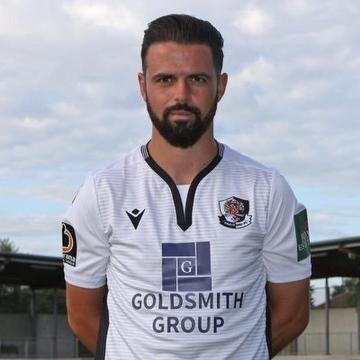 Ben Greenhalgh (27) has joined the Angels from fellow National South club Dartford on an initial one month’s loan that has been financed through the 12th Man Fund.

Ben should need little introduction to keen followers of the Non-League scene in the South East. It was however the warmer climes of Italy where his adult career started following his win in Sky 1’s ‘Football’s Next Star’ which earned him a a dream move to Inter Milan and a loan to Como where he regularly appeared on the scoresheet.

His return to the UK saw him link up with Ebbsfleet United, Maidstone United, Concord Rangers, and then to Scotland with Inverness Caledonian Thistle, and Stenhousemuir before returning to England with a period spent at Hemel Hempstead Town before joining Dartford in 2018.

Steve McKimm said today: "I’m delighted to have Ben’s services initially for a month. He not only scores goals but creates them as well and will be a big presence up front for us. He is available to go straight into tomorrow’s (November 9th) squad for the game at Hungerford Town. I would like to thank all those supporters who so generously contribute to the 12th Man Fund that has made this possible.”