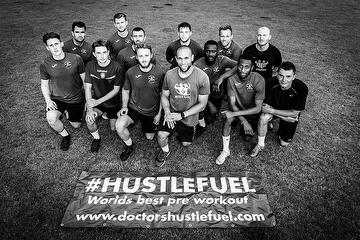 1st Team to use Supplement designed for non-league players

Damian Scannell, a name from the Angels recent past, is back collaborating with the club.

A winger, turned into a creative midfield player by Steve McKimm and a very good one at that, sadly had to retire from the game following injury and has now gone into business at two levels.

He jointly runs Simply Fitness UK https://www.simplyfitnessuk.com/personal-training/ a personal training company where both individuals and groups can improve their lifestyles through targeted training regimes.

His other project currently involves bringing to market HustleFuel, a pre-work out supplement specifically designed for non-league players, a part of the game that Damian graced with distinction for many years.

Damian explains: “It’s full of proteins and is designed to give you a kick during the game. Many non-league players are offered supplements without knowing exactly what they are, but this is something that has been tried and tested by me personally who has lived the game at this level.”

He went on to reveal that the Angels squad had already used HustleFuel for the last 15 games of last season which coincided with a dramatic rise in form of the team and eventual promotion. Damian will be supplying the 1st team with a season’s long supply of HustleFuel so who knows what may happen as the Angels compete at a higher level of football!

To watch an interview with Damian where he explains a little more about what he’s up to these days and why he was back with the 1st team squad please either click or tap here.