Emmanuel Maja is an Angels player 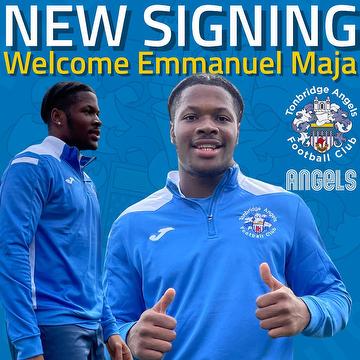 Emmanuel Maja last season’s player of the year for Isthmian Premier play-off semi-finalists, Enfield Town, has chosen Tonbridge Angels as his new club despite much interest from a number of quarters, as he continues to develop a promising footballing career.

The 21 year old attacking midfielder showed enough promise to obtain a trial at Premier League Champions Manchester City for their U18s side and while he can put that down as a great experience, non-league football has in the meantime opened the door to becoming noticed.

Spells at Croydon, and Welling United happened before he joined The Towners at the start of last season.   A real fans favourite he played a big part in propelling his club into genuine promotion contenders.

Said a delighted Angels Boss, Jay Saunders: “I’m thrilled to get Manny’s signature. He is a strong and powerful player and taking account of his age I believe he will go on to play at a much higher level.”