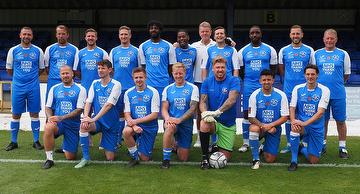 Over £6k raised in one afternoon

It really was a case of rolling back the years at The Halcyon Wealth Longmead Stadium yesterday (Sunday 22nd August) when a team of ex Angels players took on a Seanie Tonic XI all to raise money to fight the scourge of mental health illness and its affects on others.

The sight of Tommy (Who needs Mourinho we've got etc) Warrilow making a steady progress from the dressing room across the hallowed turf to the home dugout just before kick off certainly got the memories flooding back.

With play underway one could instantly observe that the legs were not quite as fast and the waists were perhaps just a little wider but these guys in their day played a bit of football and that was proved by the touches, flicks and passes that were executed in some cases with pinpoint accuracy.  The years were certainly rolled back with the sight of Jon Main and Nathan Elder both getting on the scoresheet as ex Angels soon took up a commanding lead with Ben Judge steady as ever at the back; and who could argue that midfield maestro Damian Scannell couldn't get into an Angels side of today.

In terms of the scoreline it was to stay that way even though Seanie Tonic FC, roared on by a sporting crowd, never gave up the chase and did gain some respectability with a couple of late strikes one from the penalty spot the other from D'Sean Theobalds whose Dad was in charge of the visitors.

A final encore was provided by Steve McKimm and Barry Moore taking to the pitch with the former converting a late penalty for the ex Angels despite Seanie Tonic XI lining up 4 defenders plus keeper Dev on the goal line line in a vain attempt to keep the ball out.   All totally illegal of course but it was that kind of fun afternoon when the rules could be slightly adjusted in the pursuit of a worthy cause.

For the record, the final score was Ex Angels XI 6 Seanie Tonic FC 2, but the real number that really counts was the approximate £4.5k (Stop Press! Now believed to be considerably in excess of that figure)   that was raised for the charity, and aside from the good natured banter, that was always the aim of the day.

Huge thanks of course to all the players, managers and officials  who took part, the organisers at both Tonbridge Angels FC and Tonic Music for Mental Health responsible not just for the match itself but also the evening entertainment that followed.  A tremendous day!

Picture : Dave Couldridge.  Can you name all those ex Angels players!