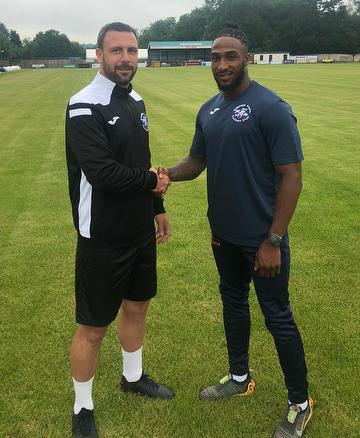 Montserrat international, Craig Braham-Barrett (32) is Steve McKimm’s latest signing as the Angels Boss continues to put together his squad for the upcoming campaign.

Craig was to return to the EFL with Cheltenham Town where over two seasons (2013-14, 2014-15) he clocked up 78 appearances for The Robins.  Loan spells at Woking and Whitehawk were followed by permanent moves to Dover Athletic, Braintree Town, Chelmsford City, Welling Utd., Hemel Hempstead Town, and finally Dartford.

He has made 14 international appearances for Montserrat, the latest being on June 8th when he was in the side that beat Grenada 2-1 away in a FIFA World Cup 2022 qualifier. Despite the win, it was not quite enough to see The Emerald Boys continue their journey to Qatar.  However, Craig is back on international duty next month for a fixture against Trinidad & Tobago in the CONCACAF Gold Cup.

McKimm said today: “This is a player that’s impressed me for some time and I’m delighted to have obtained his services.”