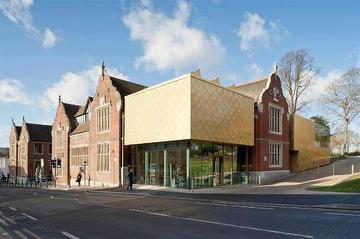 Runs until January 2020 at Maidstone Museum

Entitled 'Maidstone: United in Football', it runs from September 14 to January 19. Its focus is the extraordinary job football has done over time in bringing people together. As well as the ups and downs of Maidstone football, it sheds light on the contributions of Kentish benefactors, administrators and businesses, plus the area's innovative contributions to sport, including women's football.

Hundreds of football-related objects are coming together, some dating to the 19th century. They include a priceless collection of memorabilia compiled by mercurial football boss Jim Thompson. Many others of exceptional historical interest are being secured on loan, the highlight perhaps being the Manchester United strip worn by Kent-born David Sadler at the 1968 European Cup final. It promises to be a once-in-a-lifetime display.

Football aficionados from all over Kent have contributed with information or exhibits. A full programme of linked educational activities has been devised with youthful visitors from around Kent in mind. Special events for both young and old are planned, including an intriguing talk on the unique role of Kent in shaping world sport.

The exhibition is being curated by Stones fan John Bunyard. He told us, "It began as the story of Maidstone United, but broadened out once I started delving into Kentish football origins. It now taps into the roots of even national football, which inevitably brings in a lot of clubs and even more personalities – not to mention other sports. Anyone who likes Kent sport and loves their football will relish it".

Thanks to the generosity of former Margate FC chairman Gordon Wallis, admission charges are being waived.

A full-colour book is being produced to accompany the exhibition, which is sponsored by Golding Vision, Gullands Solicitors and iMUSC.

The Museum is close to both Maidstone East station and the Fremlin Walk multi-storey car-park.

See the Events page on Maidstone Museum's website for information on opening times.