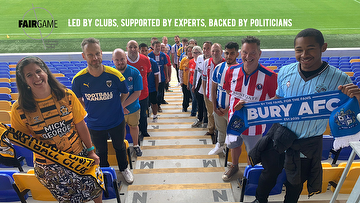 Analysis supporting the above is released today (9 June)

Football's financial flow is failing 97% of clubs below Premier League

ANALYSIS released today (Thursday 9 June) from Fair Game reveal a massive 97% of clubs below the Premier League are potentially missing out on millions each year – a status quo that will not end until the current broken financial flow is replaced by a more sustainable and fair system.

The way money is currently distributed through football is one of the reasons why football is in crisis, and towns across the country risk losing their clubs. In recent years, Bury and Macclesfield were expelled from the Football League and clubs like Bolton Wanderers, Derby County and Wigan Athletic have tittered on the precipice.

The analysis compares the current solidarity and parachute payments given out by the Premier League with a new financial model developed by Fair Game’s team of leading academics.

The Index looks to then weight the payments according to how highly a club scores on four criteria: Financial Sustainability, Good Governance, Equality Standards and Fan & Community Engagement.

The analysis is being released as part of Fair Game’s Sustainability Index: Explained programme, which includes a series of panel events exploring the four criteria of the Index – the first of which will be held virtually tonight (June 9 6 30-  see notes below on how to register) ) and will look at financial sustainability. The second looking at equality standards is due to be held on Thursday 16 June at 6.30pm.

The Government is undergoing a review of football governance through a new White Paper and has committed to a new independent regulator.

Independent analysis of effective regulation from financial business experts LCP concluded that the most successful regulation often uses financial incentives to change behaviours - for example within the pensions industry with the PPF “lifeboat” levy.

However, no such incentive is currently being proposed in football. Fair Game believes the Sustainability Index would provide that incentive and ensure that best practice by football clubs is both encouraged and rewarded.

For the purpose of this analysis, Fair Game compared the revenue given out to the 72 clubs of the EFL, the 66 clubs of the National League and the 24 clubs in the top two divisions of the Women’s game for the 2021/22 season. All clubs were also then assumed to score top marks on the four criteria.

Only five clubs – Fulham, West Bromwich Albion, Sheffield United, Bournemouth and Huddersfield – would lose out. Most Championship sides would see a rise in their revenue of £6.3m. The uplift for League One sides would be £5.1m and for League Two sides £2.7m. National League sides and the sides in the Women’s top two divisions would receive new direct payments for the first time.

Earlier this year, Fair Game revealed in 2020 – that’s before the pandemic – 52% of clubs in England’s top four divisions were technically insolvent.

Mark Middling, Senior Lecturer in Accounting and specialist in football finances at Northumbria University, was one of the academics who completed the analysis. He said: "The findings are stark. Replacing the current financial flow with one based on a more equitable measure would benefit 97% of clubs below the Premier League.

"The financial structure of the game needs a refresh too. There are many different reporting approaches in the top four divisions and a lack of transparency.

"Football needs to take a long hard look at itself. This is an important crossroads."

Niall Couper, CEO of Fair Game, said: “The Index is essential - we need a fresh approach to the financial flow. But the Index is not just about distribution for distribution’s sake. We must also look to deliver culture change.

“We need to encourage clubs to be financially sustainable, to adopt good governance, to treat equality standards as more than just a tick-box exercise, and to have meaningful fan and community engagement.

“The Premier League can help secure football’s ecosystem. If not, then it is clear that the responsibility must fall to a new Independent Regulator.

“The status quo betrays the 157 towns that are currently seeing their clubs losing out.”

Notes
Fair Game is a group of 34 value-driven football clubs working with over 40 world-renowned academics to develop realistic long-term solutions to the problems football faces.
The analysis can be viewed here.
A more comprehensive explanation of the Sustainability Index can be downloaded here.
To register for free for the Panel Series click here.