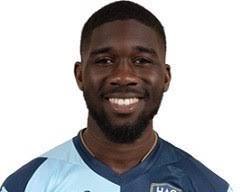 A youth product of French second tier side Le Harve from 2009, he made his 1st team debut for the club in last season's Coupe de la Ligue, the French equivalent of the League Cup, making two substitute appearances. Christ is an Ivory Coast youth international and featured at the 2017 Toulon Tournament, reaching the final, in which his team lost on penalties to England. His tournament also included a goal against Wales in the group stage.

Christ made his debut for the Angels in the National League fixture against Braintree Town on 12th October coming on as a second half substitute.