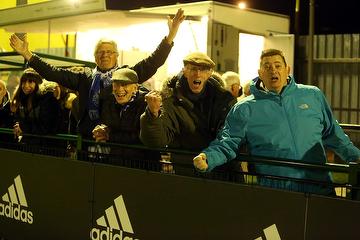 A long time supporter since the 1950’s

The club has been informed of the sad passing of supporter and owner, Geoff Calderhead on 14th March.

Geoff was a long-term supporter having followed the club from the late 50’s with one of his favourite players from the past being Geoff Truett, who probably not coincidentally played for his favourite football league club Crystal Palace.

A season ticket holder of many years, Geoff was also a regular away supporter travelling with his great friends Paul Bayliss and Tim Balsdon and, on occasions, Wink Tomkinson. When it was Geoff’s turn to drive we would be treated to his encyclopaedic knowledge of music with a medley of 1950/60’s tunes, some absolute classics and some, well not quite so classic that only Geoff could sing along too! He treated the imposters of triumph and disaster in the same manner. After defeat, we would all have our moan and then Geoff would bang on the tapes again and the singalong would dispel the gloom.

He also loved history, unbelievably knowledgeable, and a member of local historical societies.

Geoff was a generous supporter, upgrading his ownership to Grandee in the light of the pitch problems and each season sponsoring a player with Jonny Henly being his choice over the last couple of season’s.

Next season when we are all back together we will remember with a chuckle as a Tonbridge player slices a chance wide his humorous admonishment that “my old mum (or his auntie) would have scored that” or his weekly encouragement to James Folkes in particular “you’re getting the hang of it, James”!

Geoff, you will be greatly missed by all, but particularly by the Gang of Four.

He is survived by son Jeremy and daughter Emma to whom the club sends sincere condolences.

Our picture shows Geoff third from left celebrating with other Angels supporters after the team’s 2-1 victory at Haringey Borough in the Isthmian Premier Play Off semi-final 2018/19.