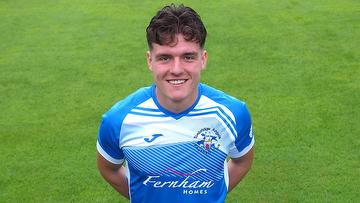 Angels central defender Harry Hudson has decided to leave Longmead feeling that playing opportunities for him at the club have become limited.  He completed 90 minutes in the Good Friday game against Slough Town but wasn’t in the squad for the away fixture on Easter Monday at Dulwich Hamlet.

Assistant Manager, Barry Moore said today (23 April) “This was very much Harry’s decision and we certainly didn’t want him to leave.  He has been a regular member of our squad throughout the season and we thank him for his efforts for the club and wish him well in his future footballing career.”

Harry joined the Angels in July 2021 and made 32 appearances having previously been with Watford U23 and Billericay Town and originally a product of West Ham United Youth.