Henly: "There’s still a lot to do" 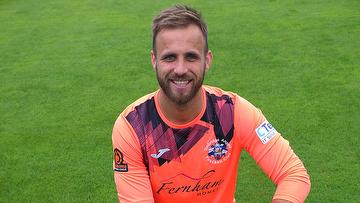 Tonbridge Angels goalkeeper Johnny Henly acknowledged that the side still has work to do despite an improved performance in the 1-0 defeat by Bath City on Saturday afternoon.

“A lot better, but I thought there still wasn’t much pressure on their goalie,” said Henly after the game. “Our end product, any shots on goal… that’s something we need to work on, but our overall performance and building the play from the back was a lot better than last week. It wasn’t 5-1 today, but we’re not happy with not putting in the back of the net at home and not having any pressure or their goal. An improvement, but there’s still a lot to do.”

However, Henly believes the experience within this year’s Angels squad will serve them in good stead as the team looks for its first points of the Vanarama National League South season.

“I think we’ve probably lacked a bit of experience over the last five years, so that’s something that we’ve got in abundance now,” he said. “But it’s now putting that into performances and getting three points, so that’s something we’ll be concentrating on. We look forward to next Saturday away at Hungerford – bring it on.”