Ibrahim Olutade signs for the Angels 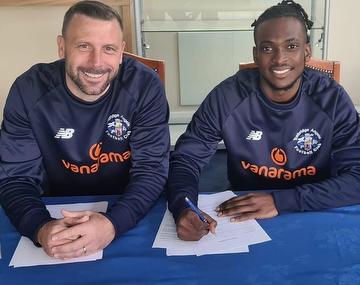 Forward, Ibrahim Olutade (22) has made the short journey along the A26 from Maidstone United’s Gallagher Stadium to join the Angels as a striking partner to Tommy Wood.

He signed for the Stones from Leatherhead in May 2019 after scoring 13 times for the Tanners the previous season. Whilst he spent much of 2019/20 back at his old club Leatherhead on loan continuing to score goals, the following season saw him break into the Maidstone 1st team squad where in a hugely disruptive campaign he scored twice in three appearances.

On signing Ibrahim, Angels Boss, Steve McKimm said: “I’m very pleased to have his signature. Because of the problems of the last two seasons due to the pandemic he probably didn’t get anything like the number of appearances his talent justified. I believe he has a point to prove and I think he can do that with us. I welcome him to the club.”