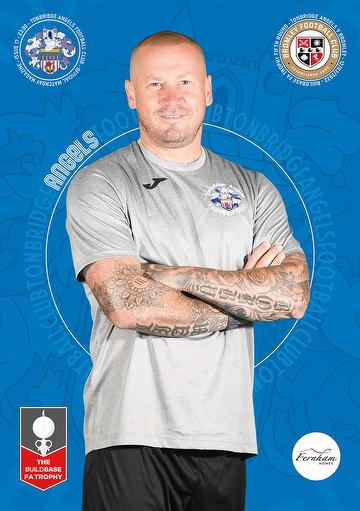 Angels and Bromley to battle it out for an FA Trophy Quarter Final place. Tickets still available

The countdown to one of the biggest cup ties in the club's history is ticking down, and from Ticket sales we now know there'll be a big crowd to cheer us on as we face Bromley for a place in the quarter finals of the FA Trophy for the first time in our history.  The Gates will open at 1:00pm and there will be additional bars and catering outlets in operation so do come early and enjoy some refreshment before the big game.  Immediately before kick off there will be a one minute’s applause for two longstanding Angels supporters who passed away recently, Terry Bamblett and Bryan Hayes.  Please show your appreciation to these past members of our Angels family.

Steve McKimm has already masterminded victories over national league sides Torquay United and King's Lynn Town.  Can this be the third?

He said: "It's going to just as hard although I wouldn't say it will be massively harder,.  Torquay were in the play-off final last year.  We got to play them and beat them.  We played Kings Lynn who came up and spent lots of money, we beat them, and this is going to be equally as tough.  They've got a good squad, a good management team, , we've got to worry about ourselves and do what we can to get through to the next round.  But hopefully they'll think we've going to be tough opponents too after beating 2 teams from their league.

"We know how big it is for the club.  It's the furthest we've ever got.  We want to try and continue the run although we know it's going to be very difficult.

"In these games if you want to just sit behind the ball, you can't do that for 90 minutes.  We've got to give it a go, see what they've got and see if we're better than them on the day."

With at least 1,200 people at the ground, judging on early ticket sales, and many more to come, there'll be a fair few numbers at the ground.

As Steve said: "The crowd has been fantastic, we've been getting 800 - 1,000 and it's growing all the time.  That's come from results, we've been on a goodish run.  We've got to go again after Tuesday to maintain the standards we set ourselves over the last four or five matches."

Steve also confirmed Luke Jenkins' loan spell from AFC Wimbledon has ended.  He was about to discuss an extension with Wimbledon, but Luke's hamstring injury means that has been put on hold.  Either way, he is unavailable on Saturday.

Steve explained:  "Today Luke Jenkins has had a scan on his hamstring.  We can't (extend)  at the moment because we don't know the extent of the injury.  We should know in the next few days whether he can stay with us, or spend time on the sidelines.  He'll be a big miss.  Fingers crossed it's not too bad."

Tickets for the match continue to be available, please click Here.  Our award winning programme full of information on both teams will be available for sale just inside the turnstiles but come early as they may sell out!  The cover is featured as our picture