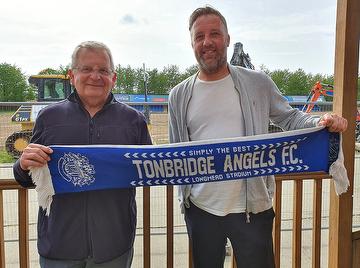 Tonbridge Angels FC is delighted to announce the appointment of Jay Saunders as the club’s new 1st team manager with immediate effect.  Jay comes to the Angels with a wealth of knowledge and experience regarding non-league football particularly within the South East area and at the highest levels of the pyramid right up to and including the National League.

He will be the club’s first full time manager in modern times which will allow him to immediately start assessing the requirements for a 1st team squad that will be in a position to put in a strong challenge in the forthcoming National South campaign.   He will start to assess the make up of the existing squad and discuss with players their thoughts and wishes so that he can arrive at a retained list and at the same time plan for new arrivals.

Jay very much embraces the community and family culture at the club and is keen to be involved in the youth side of the Angels which he sees as a vital element in the progression of players at Longmead.

His success in management is proven at these levels taking Maidstone United from the Isthmian South (Step 4) to the National League (Step 1) in just four seasons.   But it is not only this landmark achievement for which he is recognised. Something of a club legend in his playing days at Margate he made 373 appearances scoring a half century of goals mainly from defensive positions and gained 5 caps for the England semi-professional side.

Always popular and well respected with fans and players alike wherever his career has taken him, Jay displays a strong work ethic which has translated into his successes both on the pitch and in the dugout.

Commenting on today’s (9th May) appointment, Angels Chairman, Dave Netherstreet said: “We are very pleased to be able to make this announcement.  We believe that Jay’s experience and achievements are what we need to turn this club into the principal footballing centre in West Kent both at 1st team level and as a main sporting hub within the community.   I should add that there was a very strong field of five candidates, three of which Directors spoke to at some length but Jay was the standout.  I welcome him to our club.”

The club would like to thank Margate FC for their co-operation in particular chairman, Ricky Owen, wish them all success in their quest for a new manager and good luck in the forthcoming season.