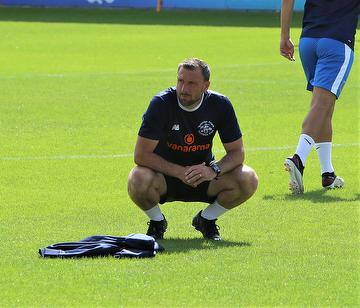 Steve McKimm expects another stern test for his Tonbridge Angels side when Bath City visit Longmead on Saturday afternoon.

“It’s going to be a tough one – they’ve always been a very good side,” said the Angels coaching, speaking ahead of the game. “I think last year was the only time I’ve known them to be down in the bottom half of the league, but that comes down to circumstances obviously, like everyone. They’ve recruited well again this year – Jerry Gill has recruited well – and they’re going to be a force to be reckoned with again this year, I think. We’ve got to get in amongst them and make less errors than we did last week.”

McKimm made no excuses for the heavy opening day defeat to Ebbsfleet last week – but insisted that his team quickly put that disappointment behind them in training on Tuesday.

“They were better than us,” he said. “We made too many errors, and when you make errors against a very good side, you get punished.”

“As I told [the players], the disappointment finished with the weekend because we have to look forward to Bath. We got them videos and clips and went through a few things that went wrong on Saturday, as well as what went right – because we did do a few things right, but not enough to get anything out of the game. Once that was done, after 15-20 minutes, because that’s the only time we get with them, we got on to training and prepared for the Bath game.”

Saturday will be the first time in 18 months that Longmead has played host to a National League South match with fans in attendance, and McKimm can’t wait to have the Angels faithful back in the ground.

“Really looking forward to it,” he said. “Every manager and every player says their fans are the best, but I really do think our fans our fantastic. They get right behind the team whether we’re doing well or not, and they also air their views – which is what should be done, obviously in a practical way, but they do it. They really get that ground going when we’re doing well, and that’s what we’ve got to do for them. We’ve got to make the supporters happy and play well and get the result, for them to stay behind us.”