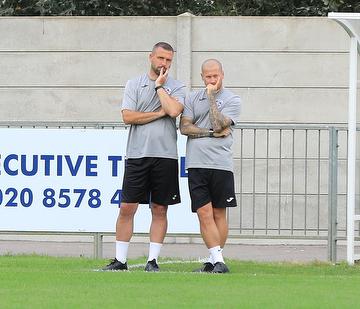 Its been four weeks since a home league game; please come and support The Angels!

Manager Steve McKimm says he expects Saturday's opponents Oxford City to be 'there or thereabouts' in the National League South promotion race this season as he prepares to welcome them to Longmead.

Last season the Hoops comprehensively beat us 4-0 in our only meeting and the gaffer is aware this year's squad is just as strong.

"Oxford are very strong, a good side with a good manager.  They play a certain way and we have to combat that.  They gave us a tough game last year, if you like they gave us a hiding, but hopefully that won't be repeated.  I think last year's game was a write off, we couldn't take much out of it.", said McKimm.

"They've lost a couple of players, but gained a couple of players   They're going to be as strong as they usually are, they're well organised.  I think anyone can be promotion candidates, and I imagine they'll be one of the teams there or thereabouts."

Since our last game, a 1-0 win over Billericay, we have added a forward option in 19 year old Colchester striker Jake Hutchinson, who trained with the side for the first time on Tuesday after joining on a month's loan.

McKimm said: "Jake gives us more options.  He's a good finisher, he works hard.  This is the step they need him at to push on to get nearer their first team.  If he does well he could be in with a shout of a first team appearance (for Colchester).  He's been out at Hitchin, he knows what it's about.  Hopefully he can learn from us and learn from the strikers we've got."

In our last three games we have adopted a 3-5-2 formation, all three performances being strong, but naturally he was not going to commit to whether we are going to be lining up the same way this weekend.

"It'll be horses for courses.  We will pick a team and a squad for the opposition we're playing against and make sure we set ourselves up well."