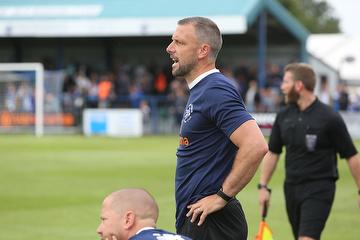 The Angels boss speaks ahead of the visit to Princes Park

Steve McKimm was full of praise of the spirit and togetherness shown by his side in recent weeks as we caught up with the Angels boss ahead of the trip to face high-flying Dartford on Saturday.

The visit to Princes Park comes a week after the dramatic draw with Hampton & Richmond Borough, when McKimm’s side grabbed a last-gasp equaliser in the ninth minute of second-half stoppage time.

“I felt it was a deserved point,” said McKimm. “Jonny [Henly] tipped one over from the top corner and they hit a 20-yard free-kick straight into the top corner that two keepers wouldn’t have saved – it was a tremendous strike. But the grit, the courage, the desire – all the cliches you want to put into it – from our team got their just rewards. I felt they thoroughly deserved that and on another day we would have got three points. But because the St Albans game was cancelled, it’s a positive that we’ve taken four points out of the last six, so it gives us some good spirit going into the Dartford game on Saturday.”

The hero last week was Ibrahim Olutade, who came off the bench late on to stab the ball home to secure the draw.

“We knew there was going to be a lot of injury time, so we knew by getting Ibs on he’d definitely have 10-12 minutes of a run-out, which is exactly what he got,” said McKimm. “That was a time that we thought they might be tiring. I’ve just got to give credit to all of them. They stuck with it, they believed in it – they believed in our process. If they didn’t, after that goal went in, they could have got the hump with themselves because they hadn’t scored first, but they didn’t. They rolled up their sleeves and went again and I couldn’t be prouder of them for getting something out of it for themselves.”

Olutade’s contribution from the bench was indicative of the squad ethos at Longmead this season, with McKimm crediting the endeavours of both Olutade and Tommy Wood, who led the line from the start against Hampton.

“Everyone wants to play – but you can only pick 11,” he said. “They’re close, they’re sticking together, they’re celebrating when we score – whoever it is, which is a good trait to have in the side. Ibs is professional – he came on, did his job, scored his goal and thoroughly deserved it. Tommy Wood took a battering for the whole game, got the shot off, it came back to Ibs and Ibs slotted it away.”

That team spirit will be put to the test on Saturday by Dartford FC, who have won all five of their matches in the Vanarama National South so far this season, but McKimm believes the Angels can draw confidence from the way they have played in recent weeks.

“Since the Bath game – although the result didn’t go for us – we’ve kicked on and we’ve looked positive in every game we’ve played,” he said. “That’s all we can do. We can only take one game at a time and deal with what’s put in front of us. Saturday is going to be a very tough game and we’ve just got to give a good account of ourselves.

“With the group we’ve got, it’s no different to Dartford – they’ve probably get a tremendous group, they’ve won five out of five, they’re flying high, so they’ve got togetherness. No matter what your results are, every club’s got a togetherness, and what we’ve got to do now is go and play football, and go and give our all, like we’ve done since the Ebbsfleet game.”