McKimm ready for visit of Hampton and Richmond Borough 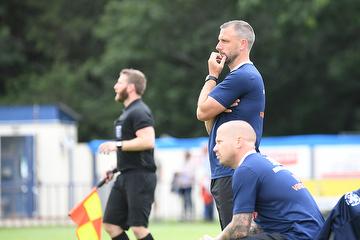 Steve McKimm is expecting another stern test when Hampton and Richmond Borough visit Longmead to take on his Tonbridge Angels side on Saturday afternoon.

The match comes five days after Monday’s Bank Holiday clash with St Albans had to be abandoned following a serious injury to Devante Stanley – and McKimm extended his best wishes to Stanley as he spoke to club media on Wednesday.

“I’ve spoken to the lad during the week and he’s had his operation,” he said. “We just wish him a speedy recovery. It was an accidental collision. He was fully committed to the tackle and Tommy [Wood] was fully committed to the shot, and it was just unfortunate that something like that happened on that day. We wish him all the best and hope that he gets back playing as soon as possible.”

Tonbridge had enjoyed the better of the chances against St Albans but were trailing 1-0 at the time of the injury, with McKimm pointing to the opportunities created as cause for optimism moving forward.

“We’ve got new players and we’re a work in progress,” he said. “If we weren’t creating chances, which we didn’t really against Bath, then I’d be concerned, but because we were creating chances… Yes we need to take them, to put ourselves on the front foot, because as everyone knows in football, if you don’t you can get sucker-punched.”

McKimm is expecting a difficult match against Hampton and Richmond Borough on Saturday and warned his team would need to be at their best to get a result.

“[It’s] exactly the same as every other game – a tough one,” he said. “Gary McCann is a good friend of mine. I’ve known him for a number of years. He’s been building a squad there for a good two, three, four years now. He’s a very, very good manager – he was at Hendon. Can I say exactly what I’m going to expect? No, because Gary is a very shrewd manager and has all sorts of things up his sleeve for different types of opposition, so what I do know is that they’re going to be hard-working, they’re going to play good football, they’re going to be lively in the front areas, and we’ve got to be on our toes to get anything out of the game.”

Having brought in several new faces ahead of the 2021/22 campaign, the Tonbridge Angels manager believes his squad is now beginning to gel.

“As a manager and as a coaching staff you’ve got to make tough decisions in certain games,” said McKimm. “You’ll get some right, you’ll get some wrong. But I believe the players have all settled in and have all stuck together, and it showed on Saturday away to Hungerford, the actual desire of everyone – even the lads that were on the bench supported together to get the victory.”

McKimm has been impressed by the performances of Adam Lovatt, who was signed from League 2 outfit Sutton United last week and started against both Hungerford and St Albans.

“He’s fantastic – he’s a fantastic player,” he said. “We tried to go in the summer with it, but obviously they needed him for their squad to see how they were going. He had a couple of injuries in pre-season and they needed him to get games. We weren’t sure if the deal was doing to get ahead – I’ve been after it for a couple of weeks. We weren’t sure if it was going to go ahead, and it just came to the forefront on Thursday and Friday and he played on Saturday. I thought he had a tremendous performance on Saturday and was equally as good on Monday.”