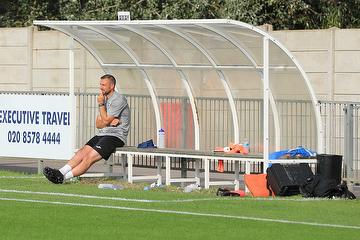 “We didn’t keep the standards we’d kept previously, and that was our downfall,” was Steve McKimm’s blunt assessment of Tonbridge Angels’ bruising FA Cup exit at the hands of Hayes & Yeading last Saturday.

Speaking ahead of the visit of Dorking Wanderers in the National League South this weekend, McKimm admitted that the cup performance was well below the standard he expects from his team.

“We just basically let ourselves down and it wasn’t good enough,” he said. “Standards were dropped from previous games, and we can’t be doing that. We’ve got to be consistent with our standards, because we haven’t got riches of players to choose from – we’re got a 17-man squad, 18-man squad, carrying a few injuries. And what we’ve got to do is just be consistent every week. You might not be the best player on the park, but you’ve got to be consistent in what you do. We weren’t on Saturday and we got exactly what we deserved.”

As is always the case in football, however, the visit of Dorking Wanderers to Longmead provides Tonbridge with a chance to bounce back from that disappointing result.

“You’ve always got to move on,” said McKimm. “You can’t stay in the past. The players have been spoken to and it’s been dealt with and we move on to Dorking now. There’s no point in dwelling on the past. As I always say, as bad as results are, there’s nothing you can do about it when the final whistle goes in terms of affecting the result. What you can do is try and prepare and try and make players better and the team better, and that’s what we’ve tried to do [this week]. Then we move on to Saturday against Dorking.”

McKimm warned that his Angels team will need to be at their best to get anything from Saturday’s match.

“Very good side, lots of experience, lots of good players,” he said. “A rich squad to choose from. They’ve had a couple of injuries I know, but a couple of players have come back. Dorking are a very good side. They proved it last year and they’ve had a bit of an indifferent start, but they’ll prove it again because they’ll be in that top six regardless – I do believe that. Marc [White] is doing what he does in terms of recruitment and getting his team playing the way he wants them to play. They’re very effective so it’s no different to what I say every week – we’ve got to be on our game to get anything from the match.”